Axon is a sci-fi crowd-gaming experience built for the Games For Change Festival that combines virtual reality with themes of fake news and social media.

Project Axon was created working hand-in-hand with clients from the Games For Change Festival as an academic project towards my Master of Entertainment Technology degree. On the six person team, I served as a producer as well as a lead experience designer. In addition to creating schedules, tasking, and deadlines, I was responsible for all play-testing, design iteration, and all narrative content creation.

The game works by separating the audience into two teams representing two feuding alien civilizations. Each audience member is armed with a phone app that allows them to send “fake news” to a player in VR who takes on the role of an all-powerful judge alien. The two teams must use these pseudo social media apps to convince the judge player that the opposing audience team is lying about them and should be punished for their crimes. After several rounds of this, the VR player declares one civilization innocent and the winner of the game.

Based on client constraints, we needed a way to engage a crowd of approximately one hundred people, and we only had a short time to build it. We wanted the experience to imitate social media, but we were worried that using players’ actual accounts would make people hesitant to participate. Our first idea was to use the Twitch phone app.

We liked it because it was a semi-private environment with chat ability. Not only did we want people to share the “fake news” headlines we provided to them, but we wanted them to discuss and collaborate as well. The paper play-tests were great, but we quickly realized in our first play-test with Twitch a lot of problems.

We analyzed our play-test findings, and designed a mobile-friendly web-app instead that solved these problems. 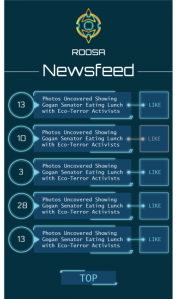 By cutting out chat function, we were able to reduce scope to something that we could build in a few weeks. This, in combination with changing how we did seating in the room, encouraged much more verbal conversation providing a better game experience anyway. Also, we changed the interface mechanics to a simple button press that more accurately imitates social media. The new app was themed more closely with our design goals. By trimming away all the unnecessary interactions and distractions, we were able to focus players on playing the game instead of how to play the game. 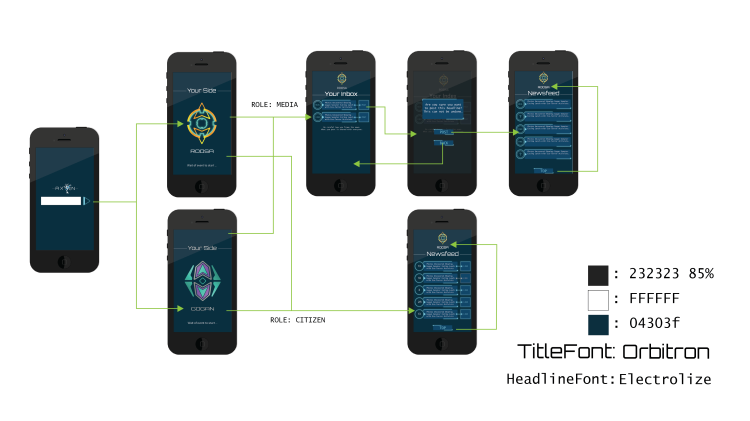 From the beginning of our design process, we struggled with balancing our client constraint of utilizing virtual reality with the judge player’s need to read a lot of text. We wanted to utilize VR to its fullest extent, and text is normally not used in this way in VR.

To solve these problems, we designed several solutions which partition the information out in manageable, interactive ways which take better advantage of VR.

We moved some of the information to these things we called “info bubbles” which appear in the cities far below the player instead of in the desk. VR players need to click on these to open the information contained inside, and that makes the whole experience feel more like an investigation.

The whole visual interface was revamped to be integrated more into the environment of the VR world. The buttons used to decide which civilization is guilty were placed into the sky, and the narration was complemented with images displayed through constellations.

Beyond cleaning up the visuals to be more streamlined and simple, the biggest design change we made was converting the VR player’s text screen from showing all the headlines to only the top four. This solved two problems. First, it reduced the amount of textual stimuli. Secondly, it had an interesting impact on the way audience players shared their fake news headlines. By limiting the displayed headlines to only the most shared ones, audience players were more selective in which ones they voted on. This increased the need for teams to strategize collectively, which improved on the social element of the game. People talked more which was one of our design goals. 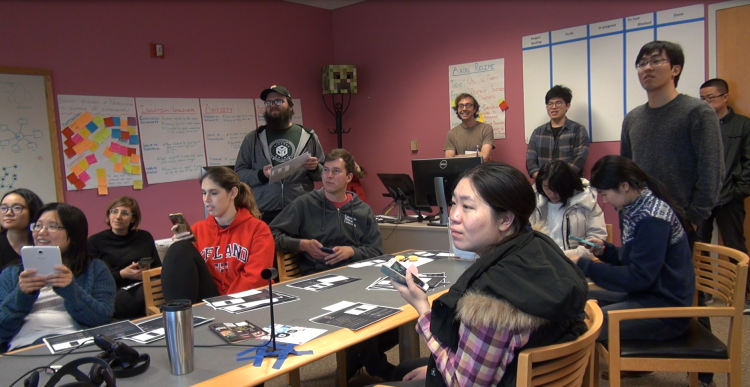 Because our game is played live with over 100 people at once, it was critical to nail down every aspect of our experience from when players walk into the room to when they walk out. This meant streamlining logging in as described in the section about the phone app, but it also meant encouraging a certain atmosphere in the room. We realized early on that our game lived and died based on player investment into the world of the game.

When tested, early versions of the game failed to achieve these objectives. People were quiet, and they didn’t care about how they contributed to the bigger picture.

In the digital game, we had to make very few changes to achieve these goals. The only change we effected in game was shifting the tone of the narration. I was personally responsible for writing the text for the narrator, and we went through many revisions with no success. After discussing the focus of our experience with our client, I came to realize the major problem with the narration. The narrator was speaking to the person in the headset instead of the audience. This encouraged the audience to feel like they were watching something instead of participating in it. Changing the narrator to be addressing the audience players dramatically shifted the tone of the room. 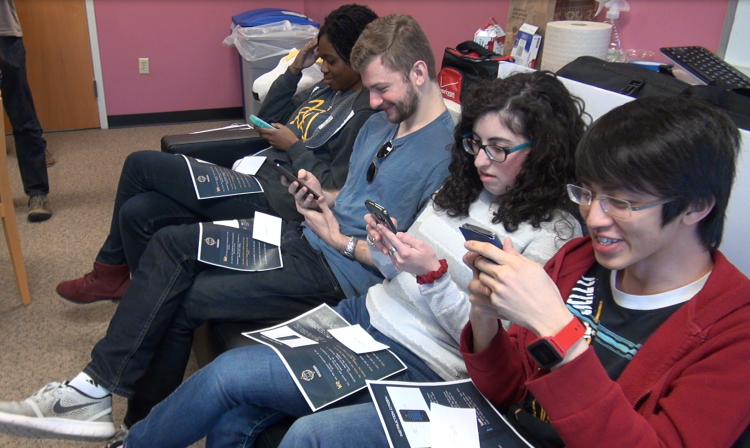 We made many other real-world additions to the game to supplement the digital ones. Instead of taking on both media and ordinary citizen roles throughout the game, players were assigned just one of those two tasks. Immediately, players felt like they had a specific purpose on their respective teams. It was less confusing. Additionally, we provided players with a paper playbill reinforcing both the instructions to the game and the universe of the story. Players also received name-tags, armbands, and flags upon entering the room. These small, but primal signals increased team identity ten-fold. All these various changes elevated the whole experience from a mere digital exercise to a social experiment. Players were finally engaged, and being emotionally invested made players have fun.

Project Axon was a wild ride in investigating how to craft a game for a hundred people to play all at once. Designing in a social environment while maintaining client constraints around virtual reality was a struggle, but it paid off in the end. The festival was an overwhelming success.

Coming soon: Images and footage from the final product presented at the Games for Change Festival this past summer.